The Blutfahne (blood flag) is or was an iconic relic of the NSDAP movement.

Originally a simple NSDAP swastika flag of the 5th SA Sturm used during Hitler's putsch in Munich on 9 november 1923, it became a sacred object of the party after the police shot on the group of men who marched towards the Feldherrnhalle. Heinrich Trambauer, the flagbearer, was hit and dropped the flag, and Andreas Bauriedl, a German businessman who participated in the putsch, was fatally hit in the stomach and fell on it, staining the flag with his blood.

It is not known how the flag was kept after the putsch (it is believed that it was taken by flagbearer Heinrich Trambauer or confiscated by Munich's police and later returned), but we know that Karl Eggers, deputy commander of the 6th company of the Munich SA Regiment, gave the flag back to Adolf Hitler after he was released from Landsberg prison, on 20 december 1924.

In 1925, the flag was fitted into a new pole and finial, Bauriedl's name, as well as the names of two other men that died this day (Anton Hechenberger and Lorenz Ritter von Stransky-Griffenfeld) were embroidered into the flag in silver thread, and a specially engraved pole carried the names of the 16 dead participants of the putsch.

The flag was first bestowed to Joseph Berchtold, head of the SS, during the second party congress held in Weimar on 4 july 1926, and became a sacred object of the party. It was entrusted to SS-Sturmbannführer Jakob Grimminger, who became the official flagbearer of the Blutfahne until the end of the war.

The sacred flag was then used during official ceremonies (Reichsparteitag, Putsch commemoration, funeral of high ranking officials, important events, etc).
A special ceremony called the "flag consecration" (Fahnenweihe) was held each year during the Reichsparteitag, where Adolf Hitler would "consecrate" the new standards of the NSDAP by touching them with the blood flag.

Note: some replica "blood flags" were likely used for different flag consecrations, as thousands of banners were produced during the period. The officials would use an already consecrated flag for this purpose.

The flag consecration ("Fahnenweihe") ceremony goes back to the 10th century in medieval Germany and Austria. The Blutbanner ("blood banner") or Blutfahne ("blood flag") was a solid red flag which was presented to feudal lords as a symbol of their power of high jurisdiction (Blutgerichtsbarkeit) together with the heraldic banner of the fief. Some feudal houses adopted a red field symbolic of the blood banner into their coat of arms, the so-called Regalienfeld. The Talschaft (forest canton) of Schwyz used the blood banner as a war flag around 1240.

When it was not in use, the Blutfahne (along with other important relics) were kept in a secured storage beneath the Führerbau in Munich.

The Blutfahne was last seen in public at the Induction Ceremony of the Volksturm on October 18, 1944. It is not known what happened to the flag afterwards, here are some hypothesis:

Flag consecration at the Reichsparteitag 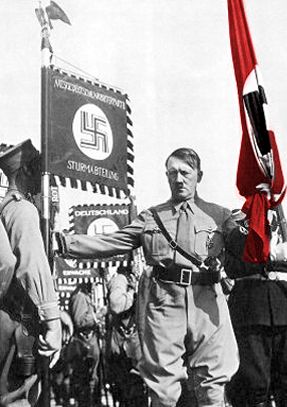 SA parade during the Reichsparteitag 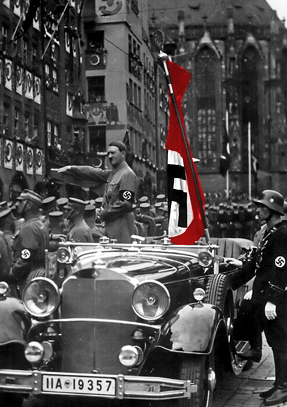 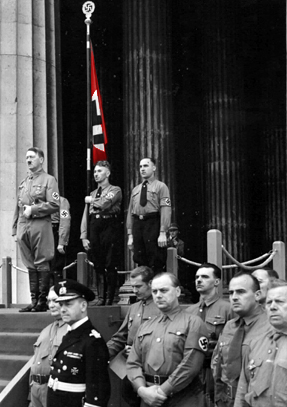 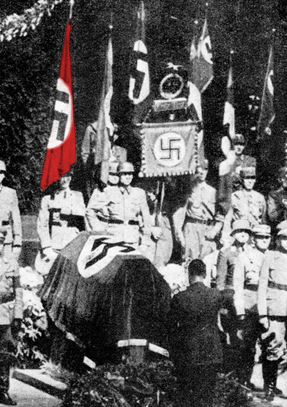 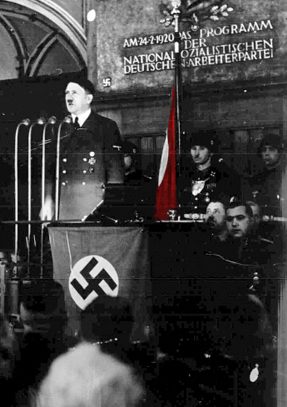 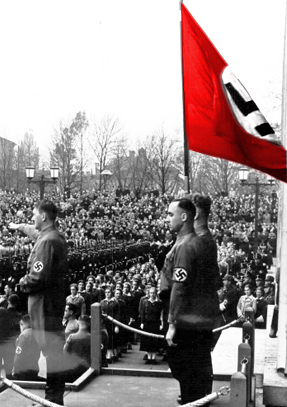