After the defeat of France and the signing of the armistice on 22 June 1940, Adolf Hitler, who was passionate about architecture and had always wanted to visit Paris had a quick visit ("Blitz Besuch") of the city , accompanied by architects Albert Speer and Hermann Giesler, and Arno Breker, his favorite sculptor, along with a delegation of military officers. According to Albert Speer (in his memoirs "Inside the Third Reich") and Joseph Goebbels (in his diary), the visit took place 3 days after the armistice came into effect, on 28 June. However, other sources say that the visit was on 23 June.

The tour itself was very quick and lasted less than 2h30, it began early in the morning at 6 am. The delegation had arrived by plane at Le Bourget airfield (about 12 kms North-East of the entrance of Paris) then drove down with several cars and entered the city through the Porte de la Villette. The streets were almost empty, as about 2/3 of the Parisians, fearing massive bombings as the German troops invaded France, has fled the city to reach the countryside during the exodus of 1940.

The group visited several major monuments, and made a few notable stops:

The Führer spent 50 minutes within the halls and rooms of his favorite Parisian monument, and the first place he wanted to visit.
Albert Speer recalls: "The great stairway, the resplendent foyer, the elegant, gilded parterre, were carefully inspected. All the lights glowed as they would on a gala night. Hitler had undertaken to lead the party. Hitler had actually studied the plans of the Paris opera house with great care. Near the proscenium box he found a salon missing, remarked on it, and turned out to be right. The attendant said that this room had been eliminated in the course of renovations many years ago. He seemed fascinated by the Opera, went into ecstasies about its beauty, his eyes glittering with an excitement that struck me as uncanny."

The convoy made a stop at the Église de la Madeleine, but did not stay long, as the building did not impress Hitler very much. 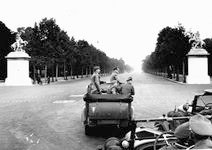 The cars then took the direction of Place de la Concorde, and made a brief stop down the Avenue des Champs Élysées, where Hitler admired the view and perspective of the avenue before going further up to the Arc de Triomphe.

The group stopped under the monument and stayed a brief moment in front of the unknown's soldier's tomb, which is just under the Arc de Triomphe. 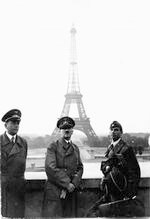 On the Esplanade du Trocadéro, a large place in front of the Eiffel Tower, just on the other side of the River Seine, the group admired the view on the tower, and several well known photographs were taken as propaganda material of Hitler's victory over France and Western Europe.

Afterwards, the cars drove towards the Eiffel Tower, and along the Champ de Mars to the École Militaire (military academy) and the statue of marshall Joffre. 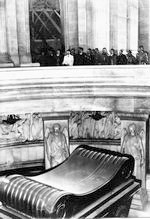 The Hôtel des Invalides was the second monument that Hitler did not want to miss, as he wanted to stay a moment in front of Napoleon's tomb, a character that he admired for his military and strategic talents.

On a side note, in 1806, after his successful campaign over Prussia, Napoleon did visit the tomb of king Frederick the Great in Potsdam in the same way.

After passing in front of the Assemblée Nationale, the convoy headed toward the the Jardins du Luxembourg and took south to have a view of the Place de l'Observatoire (Paris observatory) and the statue of marshall Ney before going north to the Panthéon, a place dedicated to the greatest French men and women.
According to Albert Speer, the architecture and size of the building impressed Hitler very much. 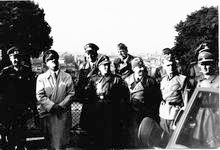 The cars then took North and passed in front of the Palais de Justice with the Sainte-Chapelle, and Notre-Dame cathedral on the Île de la cité. They crossed the river Seine to the right bank and passed beside the Place des Vosges, rue de Rivoli and the Louvres museum. In his memoirs, Albert Speer recalls that Hitler did not find any particular interest to the most beautiful architectural works of the city.
The final place of the visit was the Sacré-Cœur basilica on Montmartre (a hill with a view on all Paris). Hitler did not like the church at all, but he and his men enjoyed the view.

After a 2h15 visit, the convoy left the city and headed back to the Bourget airfield from where Hitler got back to his Wolfsschlucht headquarters, he never went to Paris again.

This tour of Paris seems to have inspired Hitler to resume the construction of Germania in Berlin, a massive architectural project to replace Berlin with gigantic military, administrative and political buildings and create the biggest city in the world, which had stopped at the outbreak of the war.
Albert Speer recalls: "That same evening he received me once more in the small room in the peasant house. He was sitting alone at table. Without more ado he declared: 'Draw up a decree in my name ordering full-scale resumption of work on the Berlin buildings. Wasn't Paris beautiful? But Berlin must be made far more beautiful. In the past I often considered whether we would not have to destroy Paris,' he continued with great calm, as if he were talking about the most natural thing in the world. 'But when we are finished in Berlin, Paris will only be a shadow. So why should we destroy it?' With that, I was dismissed."